I finally got myself organised and booked test rides on BMW’s R1200RT and R1200GS. I’ve ridden BMW boxers before – an R1150R when I was shopping for the Bandit and my uncle’s R1150RT in Canada last year, so there really shouldn’t have been many surprises. Neither 1150 had blown me away at the time, but both 1200s get rave reviews from journalists and owners alike. Seeing as a GS could easily be a long-term do-it-all Bandit replacement, and I see a two-up touring bike in my future for Northern European tours, I decided it was time to go see what all the fuss was about.

First up was the RT, and boy was that thing intimidating when parked up. It looked huge, with a dizzying array of buttons and switches on the handlebars. Tom from Bahnstormers Alton took me through the controls, although the model I rode had no stereo to play with (boo!).

If you’ve not ridden a motorcycle with a longitudinal engine before, then the violence of the motor spinning up and tilting the bike over can be a surprise. There’s a lot of weight suddenly spinning into motion, and on the RT just blipping the throttle when stationary can threaten to tip you over if you’re not very sure-footed. Which, given the width of the bike, I wasn’t. In theory, the water-cooled version due next month will be narrower, and therefore easier to hold upright at traffic lights.

For the test ride, however, I was stuck with an old design – albeit a deservedly successful one. The old dry clutch doesn’t clunk into gear like the new wet clutch (or almost any Japanese bike ever), so I had to use the instruments to check that I had actually put it into gear. Pulling away was easy, and the bike felt tremendously stable the moment it was moving. Slipping the clutch for slow speed manoeuvres was a breeze, and the bike felt a lot lighter and more nimble than the older R1150RT I’d ridden 8 months earlier. 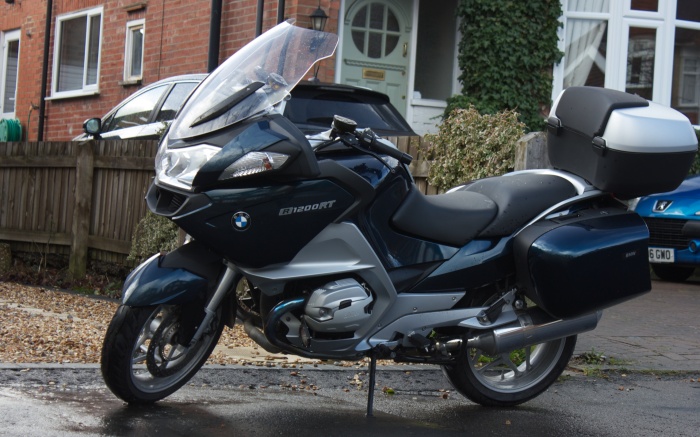 Heavier than a Street Triple, but lightest in its class

The adjustable windshield was great, and I managed to get a position close to maximum height that removed all buffeting and even allowed me to ride with the visor open at 70mph. The engine seemed a little breathless when revved up high, and I tended to stay down below 5,000 RPM, which probably explained why roll-on performance never seemed terribly breathtaking. The huge fairing really does work, however, and the impression of speed is diminished significantly, making it important to keep an eye on the speedometer.

Riding through town was surprisingly easy, although part of me wished for a gear between first and second for the congested one-way system. Holding the bike steady while Rosa hopped on and off the back at a petrol station proved somewhat nerve-wracking, but in practice it was easy enough to hold upright. Two-up, the handling didn’t change one iota, although the Electronically Adjustable Suspension could’ve been to thank for that.

The heated grips and seat worked very well, and the mirrors were large and easy to use, although they’re not where you’d expect them to be, mounted as they are in front of your hands. If anything, I’d have liked a setting in between low and off for both heated components, as even in 6C rain they were a little toasty even on minimum!

The three hardness settings for the suspension are Comfort, Normal & Sport. Adjustable on the fly from the handlebars, they made a noticeable difference, with Sport being a little harsh for high-speed cruising and Comfort causing the bike to bounce gently along like a two-wheeled Cadillac. Normal was definitely my preference, although I could see the uses of the other two modes.

Complaints? Well, being a newer BMW the RT was equipped with more traditional Japanese-style indicator switchgear, but with so little left-right travel that it was hard to tell if you’d actually pushed them far enough through thick gloves – indicator lights on the dash were critical here. I also found that the best setting for the screen for limiting noise and buffeting put the edge of the perspex right in the middle of my sightline, which was a little annoying. Looking through the screen wasn’t an option, as the saltwater spray flung up on wet winter days such as this quickly rendered any transparent surface opaque.

Panniers are standard, top box is extra and a must for pillions

The side stand was very, very difficult to pull up, as when extended it sits very far forward underneath the left cylinder. You basically have to slide yourself over and try to hook it with your heel, something I found very tricky with my 30″ inseam. In fact, a fractionally lower or narrower seat would have been nice all around, but it’s possible I could get used to it.

The handling was predictable, stable and planted, but with 25mph side winds and greasy wet roads I never had the confidence to throw it into corners. I’m sure it could manage it, and I’ve seen more experienced riders do some incredible things with even heavier bikes, but I’m not sure how far I’d be able to push that front end on a Swiss downhill hairpin.

Would I buy one? Tricky. It’s an expensive bike – you get what you pay for, but it’s still going to be a £15k machine by the time you’ve ticked a few boxes. And all that electronic gadgetry makes me nervous on an out-of-warranty used bike. I think PCP and a 3-year warranty would be your friend here, although I’m sure BMW would protest at my implications.

I’d also like the engine to be a bit more perky, a bit more free-revving, but that’s possibly going to be fixed in next month’s upgrade, and quite frankly on a 270kg touring machine I shouldn’t be expecting wheelies – although I’ve heard that Honda’s heavier ST1300 can manage it.

The BMW R1200RT would be a fantastic vehicle with which to transport two people in comfort across Europe, even in the coldest, wettest weather. I’m just not sure if enough of my riding will qualify for that description, and if I would be willing to sacrifice quite so much handling for the comfort. Which leads me neatly on to the R1200GS…

Bonus Round: The View From The Back Seat

The RT was one of the most comfortable bikes I’d ever ridden pillion on. A wide, heated seat, ergonomically fantastic grab rails, and a back rest built into the top box all meant that I could probably have sat on the back all day, in almost any weather. The only drawback was that with such a wide seat, getting on the thing felt like hoisting myself up onto the roof of a car, and would need time and practice to be perfected into one smooth, singular motion. It’s a small price to pay for the comparatively luxurious onboard experience, however. – Rosa