What is an adventure bike? Definitions abound, from two-wheeled SUVs to giant dirt bikes; from tall, upright sports bikes to the inevitable evolution of the sports tourer. Regardless, the industry, and indeed the biking public as a whole, seem to have latched onto the image of the tough, rugged, do-everything motorcycle, even if most bikes end up doing exactly the same things their owner’s previous steeds did. Touring, commuting, track days, dodging city traffic – any motorcycle can do any job, but fans argue that adventure (ADV) bikes like the Tiger 800 can multitask better than any other type of bike.

But there is that expression: “Jack of all trades, master of none”…

Now, logic says I should love ADV bikes. After all, my stated definition of the ultimate motorcycle is one that can transport me (and possibly even a passenger) to the Isle of Man in comfort, then lose the panniers and set a flying lap around the mountain course. That means it should be comfortable, carry detachable hard luggage, have reasonable weather protection, and possess both enough power to have fun and suspension that can handle high-speed sweeping corners. I daresay it’s a definition that had bikers flocking to showrooms for VFRs and similar back when sports tourers were the flavour of the month; when sports bike riders went looking for better touring comfort, and touring aficionados became tired of compromising on performance.

This “do everything” objective seems to have been met quite handily by BMW’s R1200GS. Fearsomely fast, with good weather protection, upright ergonomics, and enough luggage options to fill a cargo ship; the GS seems to compromise nowhere. This is backed up by its presence everywhere from city centre car parks to track day paddocks, all over the alps and even the far corners of the wider, wilder world. Heated grips, heated seats and a power-to-weight ratio to rival my Street Triple – what more could you possibly want?

But ticking every tickbox for every biker has resulted in a motorcycle that, realistically, costs the better part of £15,000 when you’re priced up with a basic set of travel accessories. For many it represents everything that’s wrong with biking today: no longer the cheap, efficient transport of the working classes, but a pastime for the monied border jumper. I’d love a GS, and I challenge anyone to ride one and not understand its appeal. But even amongst those who can afford such an outlay, not everyone is prepared to drop that kind of money on a bike.

Triumph weren’t the first to offer a cheaper, downsized alternative. The popular joke during the launch a couple of years ago was that Triumph had photocopied BMW’s own F800GS and shoehorned in a three-cylinder engine to make it their own. I’ve not ridden that particular BMW, partly because the standard seat height is prohibitory for someone like myself, and partly because I’ve zero off-road experience and wouldn’t know how to compare the more dirt-focused German bike. But I know road bikes, and it’s as a touring, commuting, do-everything motorcycle that I approached the Tiger 800.

Available in two versions, I was able to discount the off-road oriented Tiger 800 XC right off the bat. The bigger 21″ spoked front wheel improved comfort over bumps, but made steering heavy, seat height too tall and braking performance downright atrocious. My father’s 50,000-mile Bonneville stopped better than the twin two-piston calipers on the XC. I should not need to squeeze hard on both front and rear to bring two featherweights like myself and pillion Rosa down to a stop from normal road speeds, and the prospect of needing to execute emergency stops made me feel queasy. 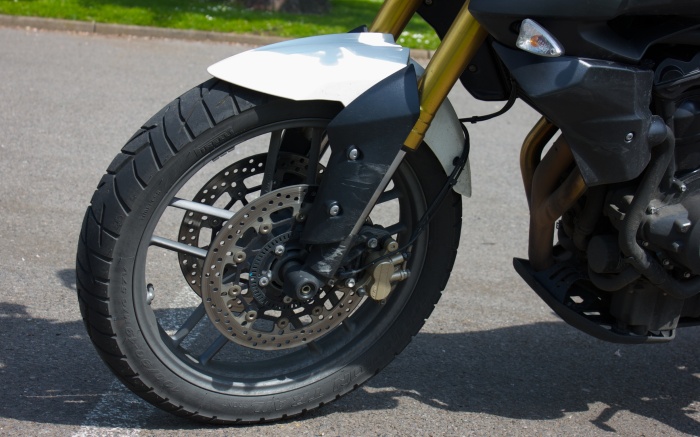 19″ alloy wheels manage a good compromise between comfort and handling

The standard ‘800’ is, by comparison, an exercise in common sense. Despite the off-road styling typical of the ADV segment, most riders are never going to venture beyond the odd country lane, something even a Fireblade could actually handle just fine. That means normal, cast alloy wheels can provide less unsprung weight for better acceleration, turning and braking. At 19 inches across, they’re still larger than the usual 17s favoured by road bikes, but far more practical than the 21s sported by the XC. The suspension is similarly sensible: with no pretensions of track-focussed precision, it is happiest absorbing the many ruts and potholes that scar Britain’s public roads.

The Tiger’s handlebars are wide and provide fantastic leverage for hustling the bike around town or lanes, but the very narrow tyre profiles and upright position combined to have me scraping the footpegs on the very first low-speed roundabout I tackled on the test ride. This unpleasant surprise made me very wary of leaning the bike too far for the rest of the ride. Even an experienced rider taking one down an alpine pass might find themselves caught out, with potentially dangerous consequences. 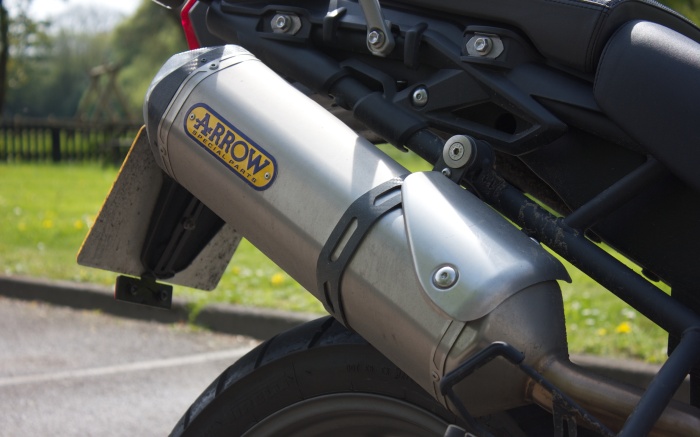 The expensive optional Arrow exhaust fails to add to the experience

The engine, Triumph’s 675cc triple stroked out to ~800cc, is torquey at low revs, but fails to deliver any significant power in the higher ranges. One of the bikes I rode was fitted with an expensive Arrow exhaust system that did very little for the sound – removing the baffle might help – and unlike on the Street Triple, I often found myself winding the throttle to the stops in an attempt to pick up speed for overtakes. Fortunately the gearbox is excellent, and throttle response the smoothest I’ve experienced on anything with fuel injection. Just be prepared to work the gearbox hard to make progress. 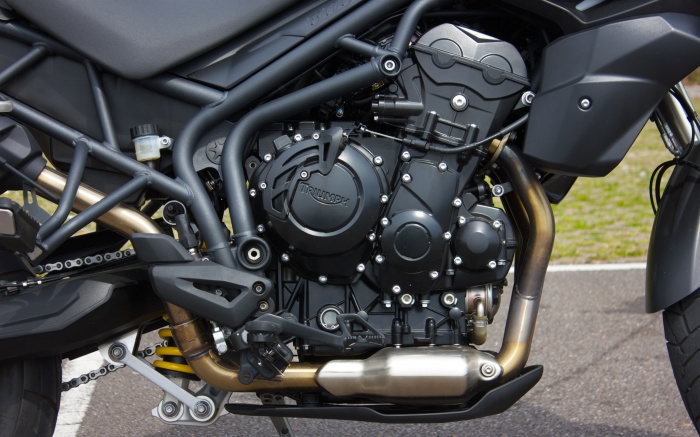 I really, really wanted to like the Tiger, not least because it’s been shortlisted by my father as a possible touring/commuting replacement for his under-powered, under-braked Bonneville. But Triumph seem to have taken the idea of the GS, and just cut too many corners to get the cost down. At this price point, and for an all-round, year-round rider like myself or my father, the competition isn’t a big £15,000 adventure bike – it’s the growing range of competent sports-touring bikes that haven’t made so many performance compromises in the name of a style that simply doesn’t interest us.

The brakes on the standard Tiger are a prime example – two-pot sliding calipers on an £8,000 bike. I know I’m spoilt by the radial boat-anchors on my Street Triple R, but even my £5,000 250kg Bandit had four-pot Tokicos and performed far better than the Tiger, despite lacking the braided brake lines that come as standard on modern Triumphs. And considering that the Tiger makes less power than its lower-capacity stablemate, the fuel economy of the long-stroke 800 is appalling. I was more conservative than usual on the test ride due to the presence of a pillion, yet still burned more fuel than I would on a spirited run on my own (much faster) Street Triple. The 30kg weight difference can’t help, but I averaged just 44MPG on the Tiger in mixed riding – and motorway riding reported a full 5-10mpg less than my Triumph does in the same conditions.

Elsewhere, the finish is mixed – there’s a lot of matte black plastic, a lot of exposed hoses, and the OEM heated grips look like something from the early nineties. I’d sooner have a pair of Oxford’s or R&G’s aftermarket grips. The robust-looking top box that Triumph are including in their current promotion is a heavy plastic box that loses a full two inches of internal capacity at the back from the handle and locking mechanism. It fits the adventure image…but I struggled to fit my lightly-packed backpack inside.

Overall the Tiger left me cold, its off-road styling somehow failing to translate into rugged charm. Instead, all that remains is a cut-down street bike with a long list of things I’d want to improve. The riding experience contained no one piece that stood out as particularly bad, but neither was there anything particularly good. As far as I can tell the only reason you’d look at one was because you’d convinced yourself that you wanted a GS or an Explorer and couldn’t justify the price tag. Disappointingly, the Tiger manages that unique own-goal of being less than the sum of its parts. 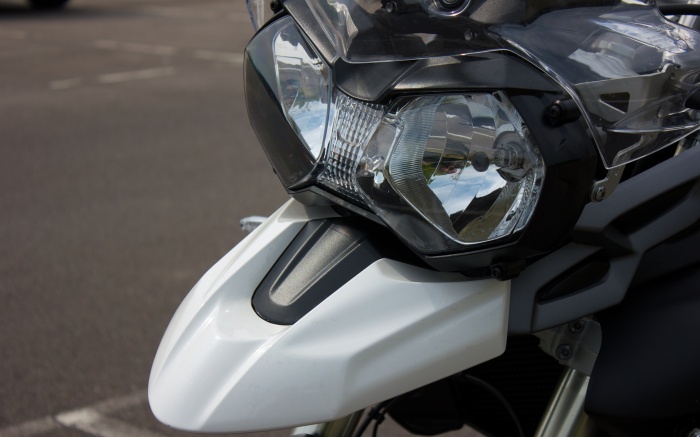 Beak is standard on the XC, but a fashionable add-on for the road bike

Naturally you’ll want to try one for yourself. But don’t get sucked into the adventure bike fashion concept and forget that sports tourers got here first, and quite frankly, for my money, do a much better job.