Back in the 1980s, motorcycle manufacturers briefly tried forced induction out on production models, and then left it at that. The bikes were expensive, complicated to service and repair, suffered from turbo lag and in reality weren’t actually any quicker than their naturally aspirated stablemates. Suzuki’s GPZ750T was about as powerful as their bigger-engined GPZ900, and weighed about the same – but cost more.

So nobody really bought one – and the other manufacturers were even less successful. But 30 years later it looks like Suzuki and Kawasaki are ready to have another ago…

Suzuki’s ‘Recursion’ concept is what started it all. Showcased at this year’s Tokyo Motorcycle Show, it took everyone by surprise – there’d been no hints, no leaks, nothing. It was closely followed by Kawasaki announcing they’d been working on a supercharged 600cc inline-four, claiming to have designed a 600cc engine with the power and torque of a litre-class sports bike. Suzuki followed a similar big-from-small theme – a 588cc parallel twin outputting a handy 100bhp at just 8,000rpm. Oh, and they reckoned that they had a Street Triple beat on weight, too. Clearly, they had my attention. 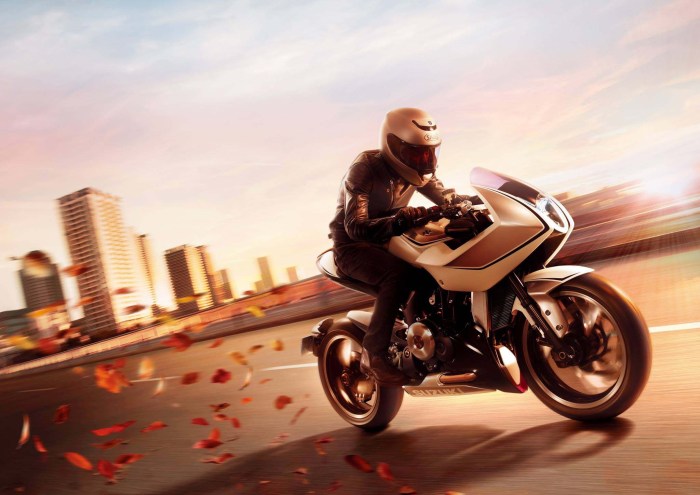 Suzuki’s stylised – and turbocharged – vision of the future.

But not everyone was impressed. A large number of editorials, blogs and podcasts seem to criticise Suzuki for their folly, citing ‘drivability’ as a concern. Their issue is that turbo’d engines exhibit ‘lag’ at low rpm, a phenomenon that causes there to be a delay between opening the throttle and revs/power rising as in a naturally aspirated (i.e. not turbocharged or supercharged – like your current bike) engine. They cite experiences riding bikes with aftermarket turbo kits, and the bike essentially being unrideable through corners.

I think they’re wrong, but first it’s important to understand where they’re coming from. To that end, I’m going to give you a crash course on forced vs natural induction. Pay attention – there may be a test later…

In your current bike’s engine (that is, unless you own a classic 80’s turbo bike or have modified your ride yourself!) the pistons pull air and fuel into the engine, like a pump, on the intake downstroke. Some sports bikes use something called ram-air – basically they feed the airbox from the front of the bike, and the air is forced in at a slight pressure due to the speed of the bike rushing through the air.

The more air you can ‘ram’ into the airbox, the more air will rush into the cylinders when the intake valves open, and the more fuel can be added to match. This makes a bigger bang, making more power. All a turbo does is increase the pressure in the airbox, forcing even more air and fuel into the engine. It’s that simple.

What isn’t simple is that this can cause lots of unwanted and some beneficial side effects. Car manufacturers have been turbocharging cars for decades, and they’re still fine-tuning the concept. You see, the turbo itself is basically just two turbines bolted together. One turbine, the ‘hot’ side, spins because the exhaust gases being pushed out of the engine are forced through on its way into the exhaust system. The ‘cold’ side of the turbo pulls air in from the outside and forces it into the airbox.

Turbo’d engines are limited, just like NA (naturally aspirated) engines to stop this happening. They carefully monitor intake, or ‘boost‘ pressure, and bypass the turbo using a valve in the exhaust system called a wastegate. This stops the turbo spinning too fast and blowing its bearings (even in automative applications the blades can be spinning at 200,000), the engine temperature getting too high and causing knocking, or pre-ignition (where the increased temperature causes the fuel-air mixture to detonate before the piston is at the top of the stroke, potentially damaging the engine) or, in extreme cases, snapping conrods, crankshafts, or just melting everything in the block solid.

If we put drag racing or showboating aside, I’m going to put my hand up and say that we don’t really need a way of making normal everyday street bikes more powerful. The S1000R makes 160bhp in a naked bike, and needs a whole host of electronic rider aids to stop it from wheelie-ing all the way down the road or lighting up the rear tyre. If you’ve never seen a turbo’d Hayabusa, go have a look on Youtube. It’s awesome to behold, but you’d never go for a sunday blast on one. Not really.

The reason is the aforementioned turbo lag, amongst other things. You see, in order to get the turbo spinning the engine needs to push out enough exhaust to get it up to speed. It’s a feedback loop, one that can take off very quickly when it catches, but it means that if you open the throttle at low engine speeds, nothing very much happens for a few seconds while the engine slowly tries to pick up speed without the help of the extra pressure. This is exacerbated by the fact that in order to accommodate the increased pressure at maximum boost the engine runs a lower compression ratio as standard. So without the turbo, you’re making even less power than you were before you messed with it!

In a car, this delay just serves to add drama to the eventual sudden rush as the turbo spools up and kicks you in the back as though the engine has just doubled in size. In a bike, you either flip it over in a huge wheelie when this happens, or if you’re mid corner…run wide and crash. Accurate power control is critical when we ride, and a big, powerful turbo can add a significant delay to both opening and closing the throttle.

But this is just one way you can use the concept of a turbo, and recently cars have been using them in another way to improve throttle response, torque and to a certain extent fuel economy – all without any perceivable lag. If top-end power isn’t as important, you can put a much smaller turbo on an engine, and with less rotating mass it can spin up much, much faster. It means that the wastegate will cut in and limit boost to much lower pressures, but this just means that the engine can run a higher compression ratio and instead simply maximise volumetric efficiency (how much fuel/air you can squeeze into the pistons) at all times.

If you’ve read my article on torque you’ll realise that this means it’s as though you’re making peak torque all the time, which is fantastic. What’s more, because you don’t need to rev the engine so high in order to make torque and power, you lose less energy through friction losses, and can (if you take it easy!) get fairly incredible fuel economy numbers. Don’t believe me? Go look up Ford’s 1.0 litre ecoboost engine. I drove a Fiesta with one of those last year, and unless I spun the engine up high the Ford would have my 1.6 litre Suzuki Swift beat on acceleration.

I think this is the direction Suzuki is going with their Recursion – make the engine small and light, low-revving with minimal friction losses, compensate for the small displacement with a small, quick-spooling turbo, and aim for a modest 100bhp with a wide spread of litre-bike torque everywhere from idle. Gear the bike relatively high in 6th for motorway runs and you’ve got a recipe for the ultimate practical motorcycle. It’s exactly what I was thinking of doing to the Bandit before it got wrecked, in fact.

The Kawasaki makes less sense to me – a supercharger works by driving the compressor directly from the crank, so you’re robbing the engine of power in order to give it even more power. That works in American muscle cars, but there’s a reason they only get single-digit fuel economy. Turbos use waste gases to make more power – by it’s very definition you’re making use of something that otherwise would have gone to waste. Superchargers are parasitic, so no matter what you do you’re burning more fuel than you need to. The only advantage is that superchargers spin up in parallel with engine speed, so there’s no lag – but this is something that small turbos’ other tricks have engineered out.