A lot of people get hung up on horsepower. The more a bike has, the better it supposedly is. A bike with less power than the other bike? Not as good at being a bike. Harley Davidson riders aren’t much better – they don’t know how much horsepower their bike makes (few people even know exactly what horsepower even is), but instead they obsess over cubic inches or foot-pounds of torque.

I propose that both groups are wrong, and that all three measurements are, on their own, very little real indication of a bike’s real-world performance. To explain this fully, we need to go through a little physics, as it’s important that you understand what horsepower and torque actually are. So please bear with me while I deconstruct several decades of motorcycle marketing garbage.

Power is a measurement of work done – as in, if you had one horse-power you could get the same amount done as one theoretical horse, in the same amount of time. This could be pushing a big block of stone a given distance, or towing a cart of smaller stones or, if we stick to the original measurement, driving a water pump. If we were to translate this into more modern numbers (thanks Google!), 1hp = 0.745699872 kilowatts.

Torque is an instantaneous force – it’s how much pressure you are applying to that rod at that exact moment, whereas power is measured over time, and horsepower is essentially a function of torque over time – how much combined torque is applied over a given period.

The reason that this is important is because it explains why horsepower increases as revs rise – up to a point. Internal combustion engines generate maximum torque when they are filling the cylinder(s) with as much fuel and air as possible – that’s when the explosions are biggest and the piston can apply the most force to the crankshaft.

The more times per second an engine can do this, the more horsepower it can produce – but the faster it revs, the less time it has to fill the cylinder with air and fuel before the intake valve slams shut and the spark plug detonates the mixture. Eventually you reach a point where increasing the revs further actually makes less power, because there’s so little time for fuel and air to get into the cylinder(s).

This, at last, explains why we have peak torque and peak power on a dynometer graph (obtained from a machine used for measuring the output of a vehicle or engine). The rev range at which these peaks occur varies, as does the level at which they max out. 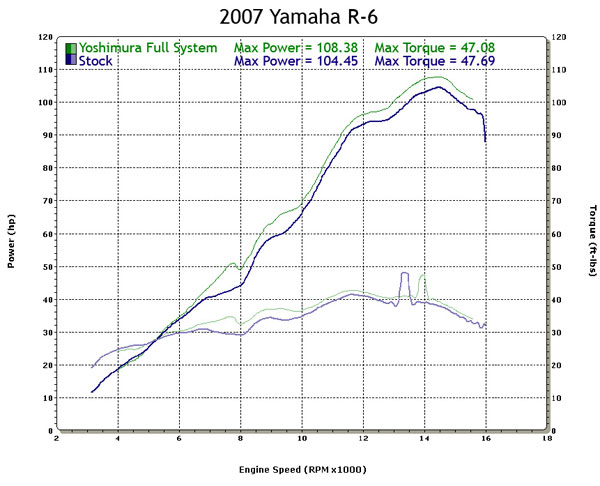 There are also a great deal of other variables, including cam timing, lift, intake tract length, exhaust header length and more that all affect the tune of an engine – in other words, where in the rev range these peaks lie. Unfortunately going into all those in detail could fill a book, and there are already some great ones out there if you want to read more on this subject!

In general, the more cylinders you have for a given engine displacement (how much air in cubic centimetres you could fit inside all the cylinders when their pistons are at the bottom vs when they’re at the top) the higher you can rev, and the more peak power you can make. A 600cc inline-four could easily make 130bhp (brake horsepower), whereas a 600cc single cylinder engine would struggle to make more than 70BHP, as the heavy piston moving up and down would limit the speed the engine could turn.

On the flip-side, that single-cylinder engine will make maximum torque far lower in the rev range, because it doesn’t need to be spinning very fast to provide a massive amount of twisting force to the crank, and in turn, the rear wheel. 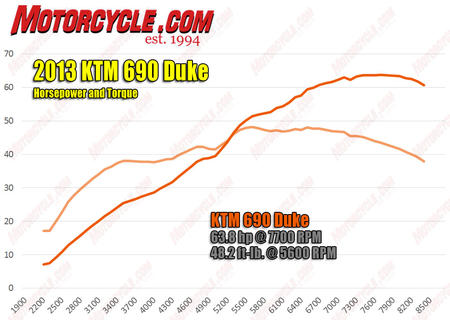 So why exactly am I torturing you with all this physics nonsense? Because it’s important to understand that even when we are talking about a bike’s horsepower number, we are actually talking about peak power, a figure only achieved when the engine is spinning very close to its maximum speed – something that does not happen very often when riding normally. That is why peak torque is a more useful measure of bike performance than peak power, and then only if you know what rev range it occurs at.

A bike with a lot of on-paper power might need to be rev’d to 18,000rpm in order to exploit it, and when you’re trying to pull away from the lights you don’t want to be slipping the clutch at those kinds of speeds. That’s why 600cc sports bikes are very easy to stall, whereas the guy with the “slow” 500cc twin-cylinder with only 60bhp will pull away without any trouble, his front wheel hiked into the air with ease.

So why do we build bikes with “power bands” so high up in the rev range? Well, to be blunt, it’s a question of where your priorities lie. At low speeds, when there’s low wind resistance, a torquey engine will pull away much quicker at low revs, and in start-stop commuter traffic, that’s preferable. If you want a maximum top speed, then it’s important to make as much power as possible at a high engine speed, when the bike is going fastest and wind resistance is greatest.

As a result, a 100bhp Honda VTR 1000F will demolish a 100bhp Honda CBR600F on the drag strip, but the CBR would win in a longer race with higher top speeds over a greater distance. If you never intend to slow down, a high-power, low-torque engine is fine. But on today’s roads, with today’s traffic, where does that really apply other than on a racetrack?