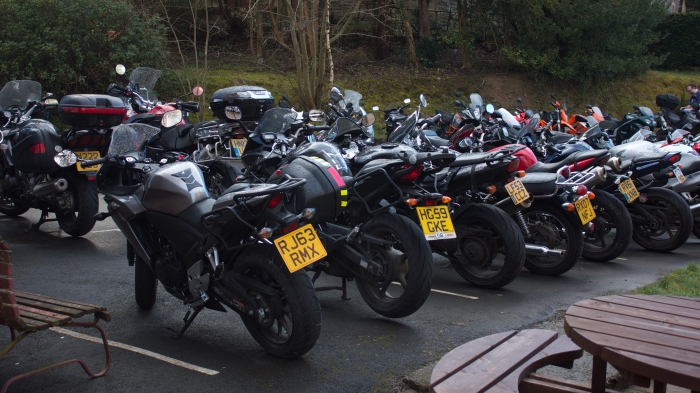 If these were cars, they’d all be high-end performance machines – not terribly diverse, really…

Welcome to the third and final part of our series examining the state and future of the motorcycle industry. Congratulations if you’ve made it this far, and hopefully some of the facts, figures and arguments put forward in the first two-part have resonated somewhat, or at last made you think.

Take a walk around the St. Crispin’s car park at the next meet. At first glance it will seem like motorcycling is pretty diverse, with everything from cruisers to sportsbikes parked up side-by-side. Drop by your local bike night and you might also see a few more small-capacity models and the odd home-brewed special in various states of disrepair. But venture further afield into city centres and all of a sudden the 1200cc-capacity adventure bike is an endangered species, utterly swarmed by scooters and high-mileage hacks.

Motorcycling is very diverse, but riding clubs like ours often forget that we represent the segment of the biking population that has chosen to turn what was otherwise a form of efficient, affordable transportation into an expensive hobby. Don’t misunderstand – I’m very much a part of this club. As much as I like to tell myself that my V-Strom is a perfect commuter, no-one trying to get to work as cheaply as possible would’ve bothered with any of my performance modifications.

Just like any hobby, I have chosen to spend far more time and money than strictly necessary in order to do something purely for the fun of it. The problem is that many of us have become rather elitist, forgetting that in any other industry, enthusiasts are the exception, not the norm.

In the car world, such enthusiasts already know that they are the deviation from the norm. They don’t get excited by a new Toyota Prius just as motorcycle enthusiasts generally don’t celebrate a new Honda SH300i. The reason is that Volkswagen sells tens of thousands of garden-variety Golfs for each top-spec GTI that rolls out of a showroom. The profits on the boring & slow, yet practical & inexpensive models pay for the development of the sexy and exciting ones. Motorcycling, by comparison, consists almost exclusively of halo models, meaning that they alone must provide all of the income.

Motorcycling’s problem is that we’ve all convinced ourselves that only the best will do, and this attitude utterly dominates all discourse surrounding the industry. Imagine if your local Ford dealer only stocked Mustangs! Similarly, imagine if every other television owner teased and mocked you for only buying the 52” model, and kept asking when you’d sell it and get a “real” TV.

The vast majority of people can enjoy the sights and sounds of a gleaming Ferrari rumbling past them down the high street, and not feel like they’re somehow inferior. Yet in the motorcycle world, it is implied from the moment we express a vague interest in two wheels, that we will, of course, graduate to a litre-plus machine eventually. Anything less is merely a stepping stone, a temporary phase, which actually has the effect of discouraging anyone who isn’t prepared to fully commit from getting involved in the first place.

Plenty of would-be riders would be rightly terrified of being sent out on something this fast.

Many of us will stop well short of this mark and are perfectly happy with the capabilities of our mid-capacity motorcycles. But imagine an average man or woman being demonstrated the fearsome capabilities of a modern litre-bike and then being told that this represented the true goal of any real motorcyclist. Many would be excited by such a machine, but others would find the concept singularly unappealing. By suggesting that the pursuit of this type of machine was what biking was all about, we were in fact suggesting that it is not for them at all.

We need to acknowledge that for many people, a Honda CBR600RR is a terrifying monster of a machine that they need never face, and that they shouldn’t feel bad for being more than comfortable on a 45-bhp twin. Even good-natured teasing is still damaging, and taken in aggregate results in lending biking an exclusive air that proves impenetrable for many. Surely it’s better they ride anything, rather than demanding an all-or-nothing commitment?

Reviewers, YouTube bloggers, fellow riders – any interaction an outsider has with motorcycling culture will generally reinforce the idea that we are all performance-obsessed speed freaks, and that there is no place in our world for more moderate positions. Being patronisingly lectured that a 650cc Suzuki Bandit was too slow to manage motorway overtakes is a personal favourite of mine.

Look at this puny little thing; it can barely keep up with traffic!

I’m afraid to say that many of us have completely lost our perspective on these matters. People have toured the planet on 250cc dirt bikes, and I doubt that anyone racing SuperTwins would call a Suzuki SV650 “slow”. Motorcycling is not a linear journey, an obvious progression, with litre-plus bikes at the top of the food chain and all others somehow lesser. These flagship models are fantastic, but not everyone can, should, or even wants to ride them. And unfortunately, motorcycle manufacturers build what’s selling today rather than thinking about future markets.

It’s heartening to see that in the past couple of years a new 300-500cc segment has arisen from the ashes of the old commuter twins. But these token offerings are still labelled as “entry-level” or “learner” bikes, the unspoken assumption being that anyone purchasing such machines will only be keeping them for as long as their license requires. What’s more, walk around the average dealership and you’ll find that these lower-performance models are mostly relegated to a single example sitting forgotten in a corner, while sales staff work hard to sell you the latest five-figure flagship.

This strategy seems solid if you look at it from a short-term perspective. Development costs for a new BMW R1200GS are not too dissimilar to those of a new 500cc middleweight, but the profit margins for those models are so much lower. Those lower-budget buyers don’t spend any money on accessories, clothing, or expensive organised tours either. Far better to dedicate those efforts to squeezing every drop of cash from a more wealthy clientele.

Someone with £20,000 to spend on a new bike will probably spend a bit more on accessories…

The only problem is that those older riders with the fat chequebooks are not going to be riding too much longer. TVAM members are pretty determined bikers and will probably ride until they physically cannot hold the bike up at a traffic light, but the hobbyists will have given up long before then. The grandchildren will have a quiet word and persuade them not to renew the PCP when it comes up next year. The keys will be handed in, the helmet and textiles sold off on eBay, and all that disposable income will go on other things, to other industries.

Statistics show that there are in fact a large number of riders in their 20’s and 30’s, but how many of them are signing up to fresh £300-per-month finance plans every three years? The only bikers I know in this age group are riding less and less as family commitments suck up time and money like a sponge. Each year renewing the insurance and road tax becomes harder and harder to justify, and the idea of buying an entirely new bike seems laughable.

£1,500 buys you an immaculate GPZ500; a far more realistic proposition for many people.

The industry hasn’t thus far concerned itself with this looming hole in their market, but this insular approach means that bike prices have spiralled out of control, and manufacturers have gotten used to the associated profits. The Milan and Birmingham shows last year were perfect, depressing examples of this. The big noise surrounded the supercharged Kawasaki H2 SX and the new Honda Goldwing. The press celebrated the newly-updated Harley-Davidsons and drooled over the new Ducati Panigale V4 . The barebones version of Triumph’s updated Tiger 800’s can, in theory, be bought for under £10,000, but only if you ignore the accessories catalogue entirely.

To any non-bikers wandering the halls, motorcycling must have seemed the exclusive preserve of the wealthy, of people who could afford to spend £20k on an overpowered toy. There’s nothing wrong with aspirational hardware, but you still need attainable options lower down the pricing ladder to tempt visitors with a route into the hobby. And if they’re happy riding to work or exploring the furthest reaches of the globe on more modest machinery, then we need to celebrate and encourage them, not mock or belittle their choices.

For most attendees, that bikes on show are no different than supercars: rich-people toys.

We need both the motorcycles and the marketing to encourage people from all walks of life to give biking a go. We need the showrooms and sales staff who can stoke the fires of enthusiasm, rather than snuffing it out like a cigarette in a styrofoam cup. We need to sand-blast the laddish image from biking, which discourages anyone below the age of thirty from taking us seriously. A recent Suzuki TV advert featured a guy heading out to buy a cup of tea from a van in a dreary, grey lay-by; I cannot imagine why no-one rushed out to relive that particular fantasy for themselves.

Many of you will, of course, disagree and exclaim that there’s no problem here. You may even see my call for more volume-selling motorcycles as an attack on your idea of what biking is. But if the market continues to shrink there soon won’t be anyone left to sell you your new 200bhp+ litrebike. So maybe don’t make fun of the next person you see riding a Honda Forza 300. Their purchase might be paying for the R&D on your new turbo-charged Suzuki Hayabusa.

Motorcycling has many enemies, and disinterested voters won’t come to our aid when politicians decide that we cause far too many accidents in a future where automated cars have stopped traffic deaths. When dealers can’t sell enough bikes to pay the rent they won’t be around to sell you your next luxury tourer either. Maybe you’ll have hung up your leathers by then, but won’t it be a sad day when the only place you can even see a motorcycle is in a museum?

Motorcycling is at a crossroads: it can either adapt and diversify, or it will fade away forever.