What to make of Honda’s “New Concept” bike?

Half of the motorcycling press seems to be hell-bent on damning Honda for building the two-wheeled equivalent of a minivan – for taking a motorcycle, and then stripping out all the things that made it fun. They would say that they’ve taken a two-seater sportscar, added five seats and chopped two-thirds of the engine off.

The other half is treating Honda’s platform-sharing and frugal little engine as a stroke of both engineering and marketing genius; the second coming of the motorcycling religion. They say that we need practical storage, sky-high fuel economy and rock bottom pricing to save our way of life from the increasingly hostile social and regulatory environment in which we find ourselves.

So where do I stand?

Well, let’s start with what the bike is, first. Honda have built themselves a steel-tube frame with a single-overhead-cam 670cc parallel-twin engine that outputs around 47 horsepower at peak. It’s almost lying flat in the frame, uses a single throttle body and exhaust header, resulting in a very clever layout that keeps weight very low on the bike. It also means that, to date, you can buy the bike in five different flavours. Three are available in dealers now: the NC700S (a naked streetbike), NC700X (a faired, upright, adventure-styled road bike) and the Integra (a maxi-scooter with dual-clutch automatic gearbox). Two other models were announced last week for the US, but I daresay we’ll see them in Europe soon too: The CTX700 and CTX700N – faired and unfaired, DN-01-inspired feet-forward cruisers. 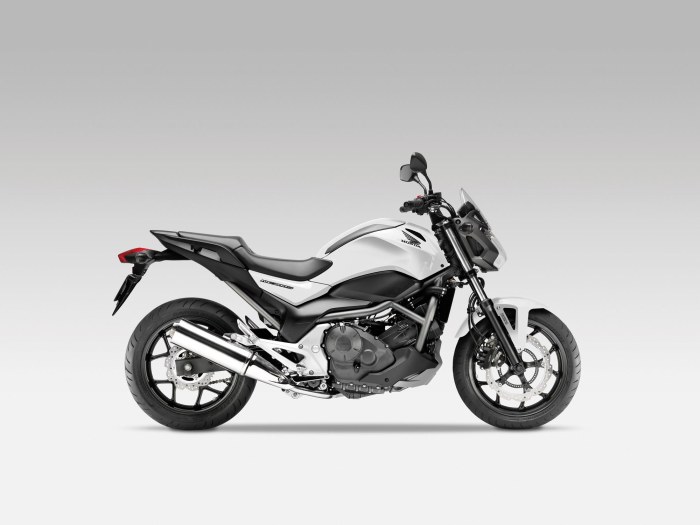 The NC700S is tailor-made for street riding.

Five bikes from one set of wheels, chassis and engine – a production technique that no doubt saves Honda a fortune, which is why car manufacturers have been doing it for decades. To save more money, the engine isn’t actually new – it’s half of the 1.3 litre Honda Fit 4-cylinder car engine, but with a 90-degree twist on the crank to give a v-twin firing order and power delivery. This also means that I seriously doubt these five models are the last we’ll see on this frugal, low-cost platform. Designing and market-testing new bikes is terrifyingly expensive, such that outright failures can almost bankrupt otherwise successful companies. (See Suzuki’s rotary engine experiments for examples.) Honda can launch a new NC700-based model for any niche they like – and if it fails? Cut their (minimal) losses and try something else. They can re-use the engine, frame, wheels and suspension for the next idea. 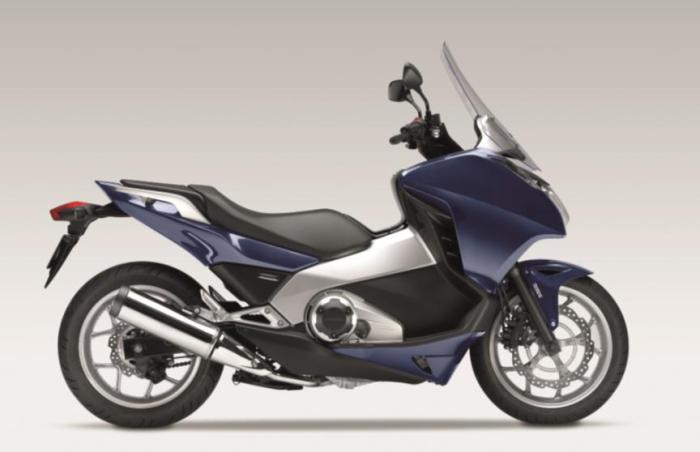 The Integra, Honda’s futuristic scooter variant of the NC700 package.

So, now that we know what we’re dealing with, let’s look at the naysayers. I’ve ridden an NC700X and, no, Honda haven’t made a minivan. You get the same freedom and direct connection to the riding experience you would do on a FireBlade, you’re still able to filter and park for free almost anywhere you like, and you still get to lean around corners, savouring every single roundabout as an excuse to try and scrape your footpegs.

Sure, you’re not going to pull power wheelies in third gear, and with a 6,500RPM redline there’s no howling exhaust note, but a lot of enthusiasts seem to have forgotten what motorcycling is actually all about. I’m pretty sure if you told my grandfather that the Triumphs and Nortons he used to ride in the ’60s weren’t real motorcycles he’d have something to say. We’ve just gotten so used to unbelievable horsepower and top speed numbers that anything less than the latest police-baiting superbike is “not doing it properly”. 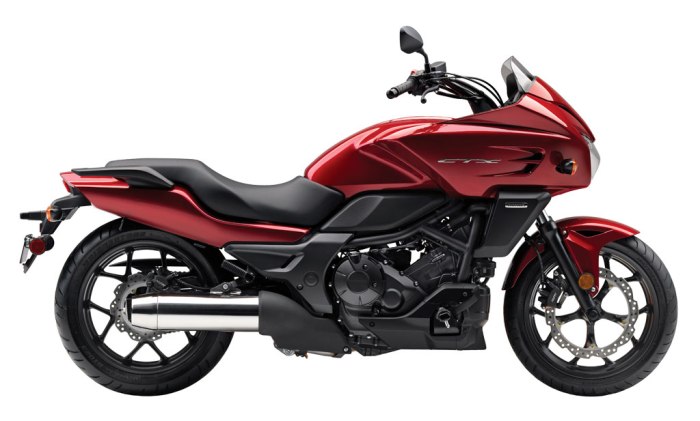 The CTX700 is the latest addition to the NC700 family. A faired (above) and unfaired version were announced just last week.

Let’s examine the other side of the equation, shall we? I test-rode the NC700X, and you’ll note that I did not, in fact, purchase one. That’s not to knock the idea – I don’t need 200 rear-wheel horsepower to enjoy myself. After all, I’m having an absolute blast on my little PCX.

In town, in traffic, and in the ever-present camera-scrutinised 30 zones in which we frequently find ourselves, the NC was great. The extremely low engine ceiling took some getting used to, but not having to rev the thing until the valves danced before I could pull away was a refreshing change. The luggage compartment was neat, although with my Contour camera and Scala intercom my helmet would certainly not fit inside. Lunch might, and it means that you won’t find yourself taking a backpack “just in case” quite so often.

I didn’t ride it long enough to appreciate the fuel economy, but a quick trip to Fuelly reveals that a large proportion of owners are in the high 70s without any difficulty whatsoever, with some in the 90s. 90mpg from something that will cruise on the motorway with ease? Did I buy the wrong Honda? Sure, my Suzuki Bandit will do 65, but only if I’m really, really careful. Commuting means 45, which means close to double the fuel cost of an NC.

But, as usual, nothing comes for free. You see, my Bandit also has double the power. And once out of town, heading up into the Brecon Beacons, powering through the bends and hills I definitely would have liked more power from the Honda. There’s no canny secret tucked away at the top end of that engine – just another gear change. And I couldn’t help but wish, with dry roads and incredible scenery, that I was on one of the sportsbikes that flew past me around the many roundabouts and long sweepers. I admire Honda’s ingenuity, and I’m jealous that a diesel hatchback will thrash my Bandit’s fuel economy figures, but I feel that 47 horsepower is a compromise too far for me.

And there’s more. The suspension is…basic. So are the brakes. They do their job – smooth out the road and stop the bike when asked – but take it out of its comfort zone and they start to complain very quickly. Honda has supported the single front calliper by pairing it to the rear with their combined braking system, which helps, but I’m not personally a fan; when the front grips and the rear slides – sending you fishtailing – it’d be nice to be able to apply them independently, thanks. I’d also argue that the relatively small 14-litre fuel tank is a missed opportunity – with that kind of economy, giving it a proper twenty litres could have made for once-a-month fuel-ups. And why does a bike so aimed at amazing MPG not have a real-time economy read-out on the dash?

The answer, of course, is price. What the proponents of the bike will point out – and what naysayers seem to forget – is that you can ride out of a showroom on a brand-new, warranty-supported NC700S for less than £5,500. True, ten years ago that would have bought you a 600cc sportsbike, but those are now north of £10k and rising. And for the same reason that I’ve kept my wrenches away from the PCX, you don’t need fancy after-market brakes to stop from 40 miles an hour, or gold-plated suspension when dodging speed bumps in school zones. And if you try and tell your man on the street that motorcycling is cheap, and then show him the prices of the latest adventure-tourer, he’s going to think you’ve gone mad. A BMW R1200 – a bike that “everyone” is apparently buying – is £15k by the time you’ve bought the bike you actually want. And remember that the NC is no knock-off rip-off – Japanese Honda build quality abounds.

The NC700, then, is a bit like a hot hatchback. It’s quick compared to your average four-wheeler, but it’s split personality and compromise in the name of practicality means that more focused machinery might leave you wishing you’d gone for something quicker. But I choose my PCX to take me to work instead of my Bandit because it doesn’t mind 30mph – and the Bandit does; it wants to go faster, always, and that makes it frustrating when I’m stuck in traffic.

So would I buy one? Maybe. The PCX works for me for now, as I never need to exceed 50mph, and I’m beating the NC700 at 120mpg. But if motorways or dual carriageways were involved, I can’t rule out trading up for something with longer legs. I couldn’t live with it as my only two-wheeler; I enjoy the speed, the noise, and the sensations of a raw, screaming race engine. But plenty of people only want the minivan, and are more than happy with it. If you believe the sales figures, many of those people might be riding Hondas now…