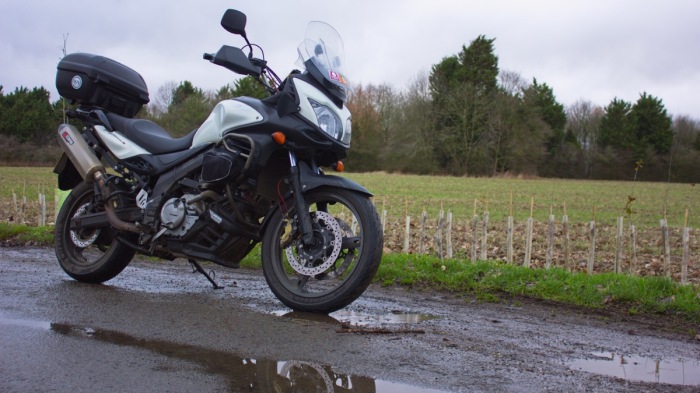 A little dirty, perhaps, but not looking bad all things considered!

Judging by the site traffic on the previous articles, my lowly V-Strom is a surprisingly popular motorcycle. I was impressed when I reviewed it, so much that I bought one with my own money. I delivered an update after a year and 23,000 miles, then detailed the extensive suspension, brake and electrical upgrades I’d made to the machine a year later. I’ve piled on the miles since, and so I figured it’s time I reported back.

So what’s new? Honestly, it’s hard to be sure – my bikes continually evolve as I tweak, adjust and optimise aspects, but the pace of development has definitely slowed of late. I installed a kit to move the rider’s footpegs down and forward to give my knees a little more space on long rides, installed and then later removed a fork brace when it was found to be tensioning and damaging the fork internals and performed an awful lot of oil changes.

Chains and sprockets last around 20,000 miles a set, and Michelin Pilot Road 4‘s (6 rears, 4 fronts) have recently given way to a couple pairs of the newer Road 5‘s. Tyre life varies dramatically depending on where and how the bike is ridden, with two-up or track riding making a noticeable impact. Use all 70 horsepower all the time and the rear begins looking thin at 6k; lean heavily on those oversized brakes and the front doesn’t last much longer. 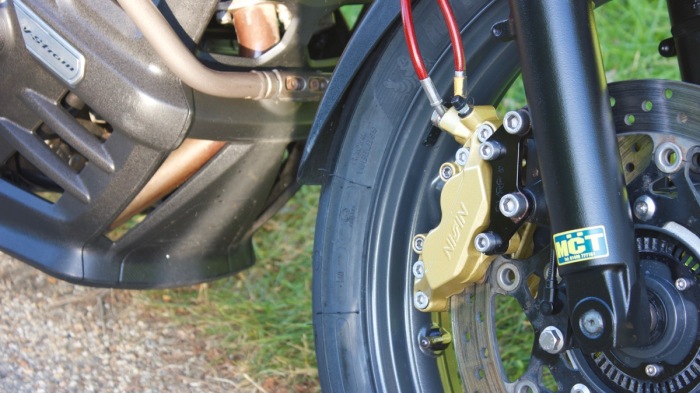 It’s amazing what a lick of paint will do…

Suzuki‘s paint & fastener quality isn’t quite up to BMW or Triumph‘s standard, even with liberal coatings of ACF50 throughout winter, and I’ve replaced many of the nuts and bolts with marine-grade stainless steel as a result. After one spring tear-down, it became apparent that there was more bare alloy than paint on the swingarm, and it joined the scuffed wheels and tired callipers at the powder coaters. I also stripped and painted the fork lowers and valve covers, which really help the bike look far newer than it is.

Other than that, Suzuki has recalled it twice for new stators, and the suspension has been serviced every 16k by a specialist to replace oil, gas and other wear items. It remains unbeatable for fuel economy and can return over 70mpg on a relaxed continental jaunt – you have to drop down to much less powerful and capable machinery to beat that. Overall, it continues to be an incredibly practical, efficient, and comfortable way of covering ground quickly, regardless of weather or road conditions. And it’s never broken down. 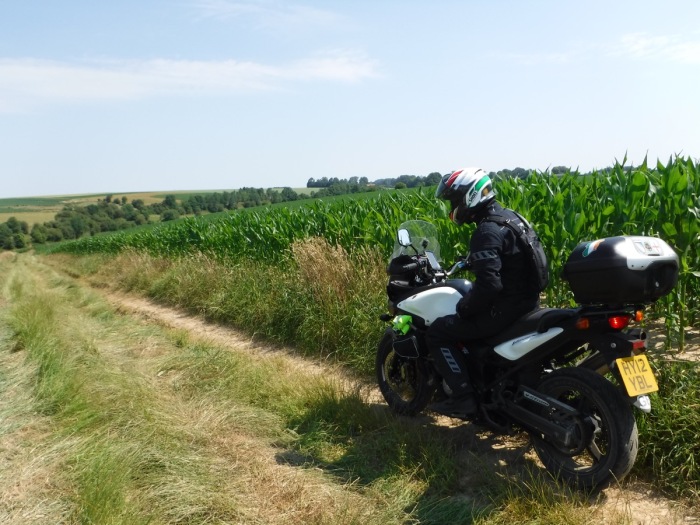 I’ve tried a little light off-roading, and with more appropriate tyres I might try a little harder.

That last part came as a bit of a shock when I realised it a few months ago. There was a very short phase around 40k or so when the main relay started sticking, but by the time the replacement part had arrived the problem had vanished, never to return. The spare part has lived under the seat ever since, waiting for the day when I’ll need to perform a quick swap, but 30,000 miles later everything’s just fine. One or two bolts that I myself had installed worked loose once, but I can’t hold Suzuki responsible for that.

I had to swap out the gear linkage after the pivot shaft accumulated enough wear to make for a very loose pedal. Brake pads themselves seem to last a very long time, with the bike rewarding a smooth riding style that conserves momentum through corners. It’s still on its original battery and brake disks, and the current clutch has been in there since a friend cooked it practising their u-turns at 21,000 miles. The R&G heated grips were replaced once due to the cables fraying, but I addressed the apparent design flaw with some Sugru. 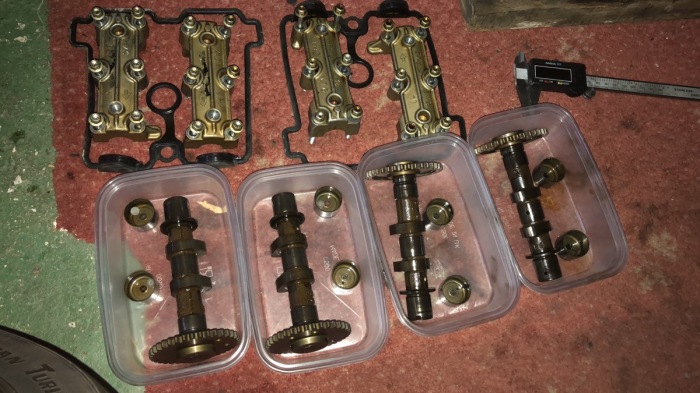 Adjusting the valves is a massive pain in the backside; fortunately, I’ve only had to do it once.

A little more power would be nice for two-up jaunts, the standard-fit panniers stick out too far and adjusting valve clearances is a massive pain in the backside – two valve covers, two camchains, four camshafts. Nevertheless, it’s become the gold-standard against which almost every bike I ride is judged. Perhaps it’s not really fair to compare a factory-spec motorcycle against one that’s been obsessively fettled, but aside from the fact that the suspension is specced for my own weight rather than some mythical average, there’s nothing I’ve done that an OEM shouldn’t be able to do better.

Starting with any of the dozens of clean, low-mileage used V-Stroms for sale across the country you could build a very similar example – complete with expensive suspension and fancy brakes – for £5-6k; less if you pick a slightly heavier pre-2012 model. A brand-new Suzuki V-Strom 650 costs just over £7k; a Triumph Tiger 800 more than £9k. A KTM 790 Adventure is £11k, and a Ducati Multistrada 950 closer to £12k. Any kind of luggage, heated grips and often handguards are extra, and my used ‘Strom came fitted with all of the above for £5,000 just four years ago. 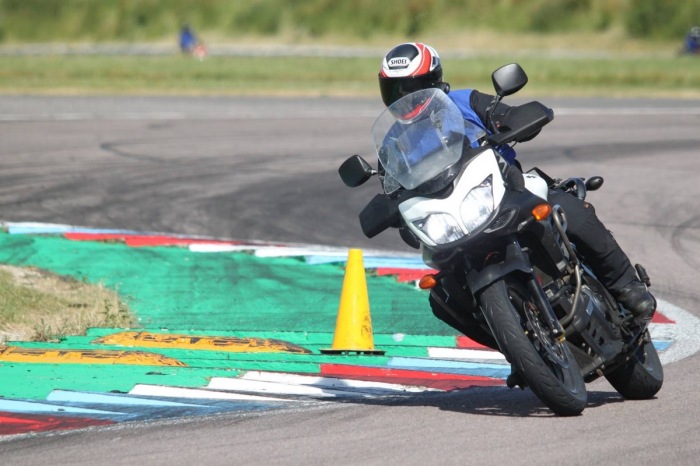 Is it perfect? Certainly not – although I’m quietly confident that a similarly-fettled V-Strom 1000 would be pretty damn close. If it’s fancy toys or a prestigious badge that you’re after, then yes – you’re going to want to look elsewhere, and you’ll be paying a lot more for the privilege. And if you’re a larger, heavier individual or do most of your touring two-up then yes, you may want a little more power for those fast overtakes on steep hills. But I caution against buying more power for the sake of it; there’s nothing more satisfying than overtaking £18k, 160-bhp BMWs on a cheap 70-bhp Suzuki.

The V-Strom‘s 650cc v-twin engine is coming up on 20-years-old now, although Suzuki‘s engineers have been tweaking and adjusting the design it’s entire life. I’ve ridden bikes with more power and it doesn’t always make you faster, or make for a more entertaining ride. If you must buy new, the latest models have traction control and even a voltmeter built right into the dash. They have lighter wheels, neater, tucked-in luggage, and more modern styling. Suzuki has finally started putting similar 4-piston brakes on the new SV650, so I’m hoping the little V-Strom will get them as standard soon too. 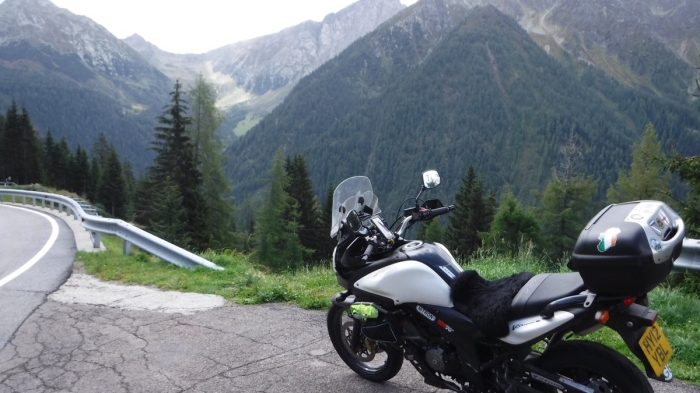 And odds are, they’ll be just as reliable; 70,000 miles without missing a beat, through some horrible weather, in incredible heat and freezing cold. I’ve had both wheels in the air and scraped footpegs on both sides, gotten it stuck off road and thrashed it mercilessly around a racetrack. It’s never burnt a drop of oil, and only required a single valve adjustment. The internet tells us that engine failures are almost unheard of, even at double my mileage, and if it does ever go bang I could find a new engine on eBay for £200.

As far as I can tell, the biggest problem with the Suzuki V-Strom 650 is that I may be riding it forever… 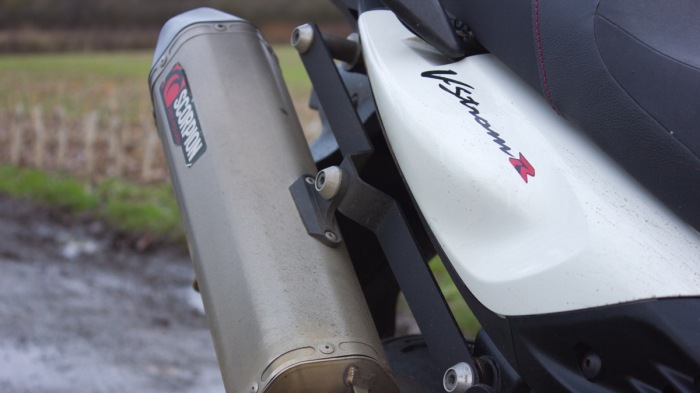