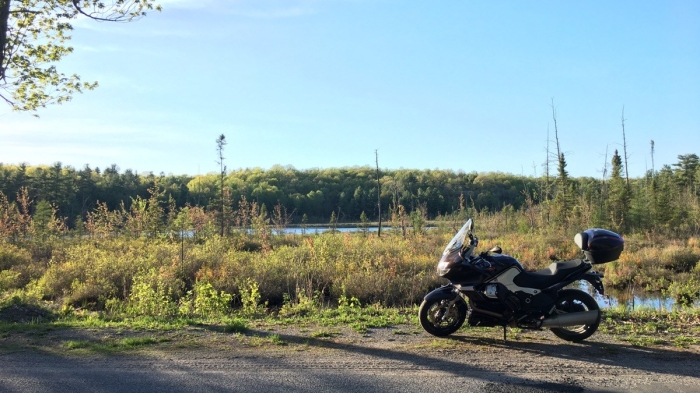 Canada is often massive and empty; but sometimes, that emptiness can be spectacular.

I think I can safely assume that all of us have ridden our bikes in the UK, and many have pushed beyond our borders to explore the untamed wilds of Europe. Out there await wide, open stretches of dusty French countryside, verdant German forests and snowy alpine mountain hairpins. But how many of us have pushed further than that, ventured away from our continent into Africa, Asia or North America?

I recently returned from a three-week family visit in Canada, a country known for its vast tracts of sparsely populated land, where bears outnumber the people and Tim Hortons coffee & doughnut shops outnumber the bears. While out there I had the opportunity to borrow my Uncle’s Moto-Guzzi Norge 1200, a bike no longer sold on these shores, and learn a little bit about motorcycling in our former colony. Let’s just say the grass isn’t always greener on the other side…

Backpack in the top-box, suitcase on the pillion seat, helmet as carry-on. No problem!

2) Petrol is cheap, but everyone still complains about the price. At last count, you’re looking at around 70p per litre, although if you refuel on Indian reservations it’s cheaper still.

3) …and it comes in many flavours. Do you know what octane-rating your motorcycle needs? 85? 87? 93? According to your owners manual, it’s probably 91, or 97 if you own a modern BMW, but everyone here just buys in the cheapest grade anyway. I hope their knock sensors are working…

4) The cars are enormous. The pick-up trucks we see on British roads are dwarfed by those driven in Canada & the US, and after a while, you start to think of Porsche Cayenne SUVs as adorable compact cars.

The blue truck on the right is bigger than any SUV you’ll encounter on British roads.

5) Filtering is illegal. And people really, really don’t like it when you do it. You can sit in traffic in 30C+ heat like everyone else…minus the air conditioning.

6) Speed limits are patronisingly low. We complain about Oxford nationals, but let me put things into perspective. Motorways are ~60mph, A-roads are 50mph, and B-roads are usually 30mph. Around town 20-25mph is the norm. And it gets worse…

7) The Police don’t mess around. I was fortunate not to encounter this personally, but the police take an extremely dim view of speeding and lurk behind billboards and trees with radar guns to catch you coming from miles away.

With speed limits at around half what you’d expect in the UK, cruisers start to make sense.

8) Every junction has a ‘Stop’ sign. And boy, will they nail you for rolling through one of these. They’re everywhere, and particularly galling when a) you can see for half a mile in every direction and no-one is coming and b) you will have to repeat this stop/start pantomime a dozen times just to cross a small town, even when there are no other cars on the road.

9) Most roads are long and straight. In a country this large, be prepared to go cross-eyed staring at the horizon for hours on end.

10) No-one cares what you ride. Here in the UK cruiser riders won’t wave back, and sports bike riders seem to ignore anyone not similarly-equipped. In Canada, everyone waves!

11) Can-Am sell a lot of Spyders. The three-wheelers never really caught on here, but if you can’t filter, petrol is cheap, speed limits are low and parking is plentiful, then the disadvantages of the larger, heavier vehicles evaporate. Still can’t lean, though…

12) Everything else is a Cruiser. Not quite as Harley-centric as the US, but pretty close.

13) All motorcycles look showroom-fresh. No-one rides in winter due to months of -30C temperatures and several feet of snow, and no-one rides in the rain because motorcycles are just recreational vehicles over there. That means no rust, no corrosion of any kind – you’ve never seen such a clean 2002 Kawasaki Ninja 250. 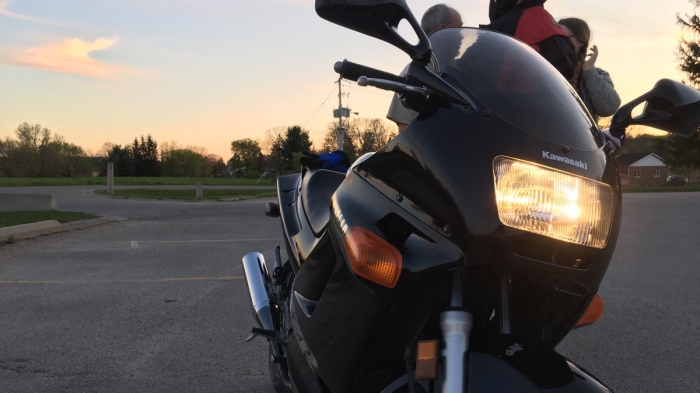 No winter riding means no salt, means no rust – as a result, even used bikes are immaculate.

14) Canada has no annual MOT. You have to get a safety inspection when you first buy your vehicle (new or used), but after that, it’s up to the owner to do their own checks. Or not, as the case may be. If you borrow someone else’s car or bike, don’t assume their brakes work, or that any critical safety equipment is functional.

15) Safety Gear is very optional. I saw a few people wearing jackets and gloves, though I’m unconvinced that they would have stood up to anything beyond a bit of light gardening. Helmets are open-faced, often pudding-bowl design, and sandals are not uncommon.

16) Learners can ride whatever they want. Canada has graduated licensing, but the only limitations are that lower-class license holders aren’t allowed on motorways. 500-600cc motorcycles are considered good beginner bikes, and watching people wobble away from the training centre on brand-new big-twin Harleys is a common (and comedic) sight.

Helmets are required by law…but the definition of “helmet” has been stretched to breaking point.

17) No-one is paying attention. Long, straight roads, cruise-control and ultra-soft suspension combined with low-speed limits mean that even I found myself reaching for my mobile phone while out driving my uncle’s truck. Rest assured I caught myself in time and re-focused on the road, but it goes a long way to explaining the continent’s ‘distracted driving’ problem.

18) You can turn right on red lights. This is fantastic. You’re driving on the right, so if it’s safe to do so you can trundle right through that red light rather than waiting pointlessly.

19) Good riding is hard to come by. Interesting riding can be scarce, and you’ll likely need to travel a great distance – several days or more – to find the really good stuff. The local riders just ride the motorways from Tim Hortons to Tim Hortons, stopping to eat a doughnut and admire each other’s chrome before heading on to the next one.

In Canada, a “rideout” generally means taking the highway from one coffee shop to the next.

20) Tarmac is optional. Gravel roads are fairly standard once you get away from the main routes, and it’s not uncommon to encounter patches of sand or gravel mid-corner out in the countryside.

I’m told that pushing on to the Rockies will give you some of the most spectacular riding of your life, and that the best riding can be found off-road, out in the endless wilderness or spectacular national parks. But Canada will warp your sense of scale; the entirety of the UK would comfortably fit inside the smallest Canadian province, so simply getting to those roads will eat up your whole trip. Your nearest trackway is several day’s drive away.

After riding in Canada, even the M1 will seem like a cornucopia of excitement, variation and engagement. It was nice to visit my family, but I couldn’t wait to ride my bike back home again.

Finding good riding roads often means venturing deep into the wilderness. Worth it, though…