If you can’t beat them…join them?

It may come as no surprise to many of you that not everyone wants to ride everywhere as fast as possible. It certainly puzzled me for quite some time.

My entire riding career has been spent in the pursuit of optimising, improving and developing both my skills and the tools I use in an effort to become an ever safer, smoother and faster motorcyclist. I approach everything I do in this manner, always seeking to improve on previous efforts, iterating on designs and techniques in a rewarding, yet ultimately futile attempt to achieve perfection. It’s probably something to do with growing up in Germany.

When my rudimentary skills proved too limited, I joined the TVAM, the UK’s largest IAM-affiliated advanced riding club. When my bikes held me back, I upgraded and modified them to increase their performance envelopes. I daresay my V-Strom 650 is the most over-developed example in the world, and I’d like to think I could keep up with most riders just fine through any alpine pass of their choice. But I’ve also come to the realisation that, for many motorcyclists, this might be missing the point.

Not everyone’s idea of a relaxed ride…

Where I find satisfaction and enjoyment from a series of perfectly-executed mountain hairpins, my parents are quite content to trundle along in the middle of their lane gazing around at the surrounding scenery, often at a considerable amount below the posted limit. When returning from our last trip they enthused at length about the villages, towns and countryside monuments they had seen on our travels. I mostly recalled a series of apexes amongst a green blur in my peripheral vision. Everyone had a great time, in their own fashion.

For a number of years, we toured together, with myself and often my brother waiting at junctions and the top of passes for parents, aunts and uncles to catch up. But as time has gone by the performance delta has increased; both myself and my bikes have gotten faster, while my family have preferred to dawdle at a decreasing pace. Two years ago the frustration this caused became too much, and we resolved to no longer ride together, parting ways each morning and meeting again at the evening’s hotel to eat, drink and swap stories.

For many people, the highlight of a day’s riding is to be found once you get off the bike!

While this initially appeared to be an ideal arrangement, the truth is that in practice it strongly resembles two parallel vacations. We aren’t really on holiday together, and there would be precious little difference should the two trips happen in series, rather than parallel. From my perspective nothing would change if they swapped out their bikes for minivans; either way, we weren’t really touring together anymore.

And so, a new solution is needed. Encouraging my family to join their respective IAM-affiliated clubs and learn to keep up has been unsuccessful because they’re not actually interested in getting any quicker. They have the skills, forged over decades of riding, but aren’t interested in using them to cross countries at speed. And if they won’t go faster, and if I want to get back to riding as a family, then I’m going to have to slow down.

I’m not the most patient person in the world, especially in 30C heat.

That sounds easy; just use less throttle, right? Except that it’s not. Everyone has their own stride, their own pace – walking down the street with someone who’s gait is considerably shorter than your own offers a similarly frustrating experience. You speed up and slow down, see-sawing back and forth as you attempt to force your own pace to match theirs. And while this is, of course, possible with considerable restraint, on many motorcycles it can make for uncomfortable and even painful riding.

Both of my own bikes are built to go fast. They’re fun to ride quickly, satisfying tools designed for the purpose of covering distance at speed, regardless of how twisty the route. But sat upright at half their usual speed they are uncomfortable to ride, with engines, brakes and suspension that are ill-suited for this unfamiliar task. With their smaller engines, they demand higher revs for smooth operation, which does not make for a peaceful ride at lower speeds. This results in bikes that are fun when ridden hard, but supremely dull and unmemorable when reigned in for a gentle cruise.

Even on an adventure bike with my heels on the pegs my knees are scrunched up.

Which is a very long-winded way of saying that I need a new bike! Not a replacement for either of my existing steeds – each serves a very particular purpose and fills a considerable niche of my motorcycling world. There’s still a large gap where a proper dirt-bike should be (watch this space…!) but for now it’s time to fill the newly-created slot designated “Family Touring Bike”.

This means that I will be shopping for a motorcycle using radically different requirements than I have ever considered in the past. Horsepower isn’t important. Cornering ability is secondary. As a touring mount items such as hard luggage, wind protection, and a 200-mile tank range are minimums, but experience has also taught me to value compliant suspension, low maintenance engineering, and seats and handlebar configurations that are all-day comfortable. 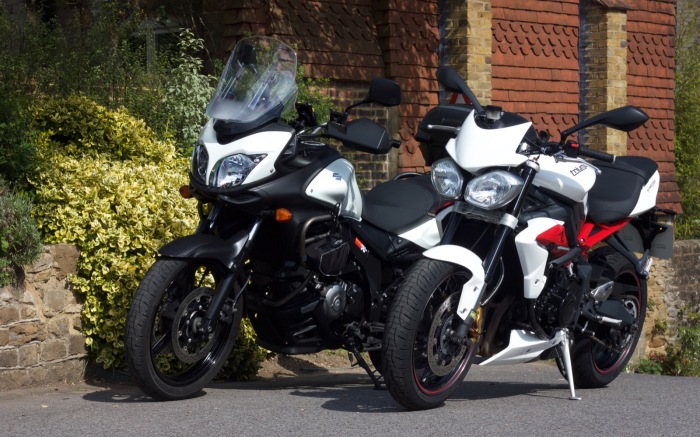 New to the list is a feet-forward riding position. Despite my best efforts with foot-peg relocation, my knees still ache after long days on the V-Strom, never mind my Street Triple. That discounts your usual suspects – most tourers have your knees at a 90-degree angle at most, and I am really aiming for much more than that. Highway pegs are one suggestion, but as the name suggests they don’t work terribly well on winding roads where the rear brake and gearshift might be required at any moment.

But more than anything, whatever I choose absolutely, positively must be enjoyable – rather than frustrating – to ride at low speeds. It’s time to go shopping…

Could a new kind of bike help me enjoy a more relaxed kind of motorcycle tour?

3 thoughts on “A Different Type of Riding”