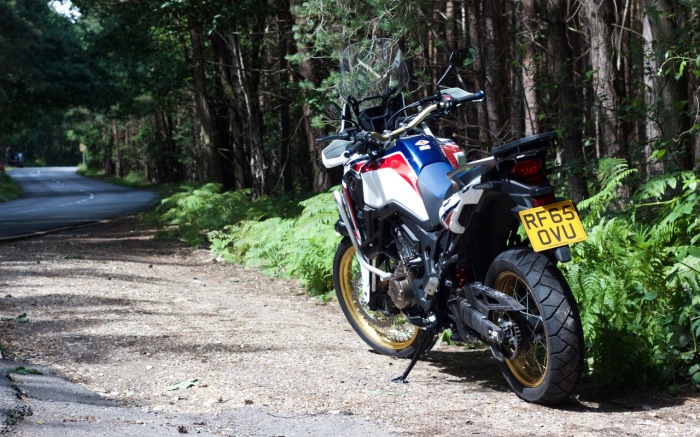 So; Honda finally joined the Adventure Bike market for reals. What’s more, they’ve revived a historic name plate, the Africa Twin, to help them punch their way into the biggest, most popular, and most cut-throat competitive market motorcycling has seen in a decade. Time to see if the ADV segment has a new king, or just another pretender to the BMW crown.

In the last few years it seems that Honda has tried to create an adventure version of practically every bike it makes, to varying degrees of failure. First we saw them take the only 1200cc bike they made (the VFR1200 sports-tourer) and create the Crosstourer, which is a bit like thinking that dressing a portly middle-aged businessman in khakis is sufficient preparation to go explore the Amazon.

Then they decided that they should do the same thing with the old VRF800, creating the Crossrunner, which recently received a massive overhaul in line with its sports-touring sibling. With Honda quickly learning that much of the popularity of such designs stemmed from the upright posture and tractable engines we then saw beaked and high-barred versions of their low-powered twins, the CB500X and of course NC750X. 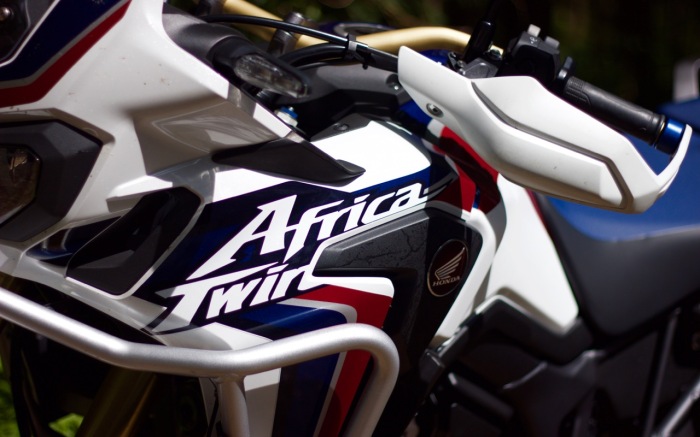 Africa Twin: can the new model live up to the reputation that comes with the name?

The thing is, since the eponymous BMW dominated the world with a mix of on and off-road capability, the segment has splintered. We’ve got Adventure-Sports bikes; tall and spindly, but with race-ready suspension and brakes, with power outputs to shame MotoGP bikes from a decade ago. We’ve got Adventure-Touring bikes, epic flagships with enormous fuel tanks, engines and wet weight figures that dwarf even traditional pipe-and-slippers tourers of yesteryear.

And yet, throughout all of this there remain a hard core of “proper” Adventure motorcyclists, individuals who really appreciated the early bikes’ ability to scramble up rocky trails or across sand dunes, to ford rivers and traverse truly inhospitable terrain.

Those people have watched with horror as wheels switched from spokes to cast alloy, as unprotected sumps underpinned ever larger, heavier, more powerful powerplants, and as marketing and engineering departments competed to see who could cram the biggest collection of fragile, expensive electronics into their two-wheeled tour buses. 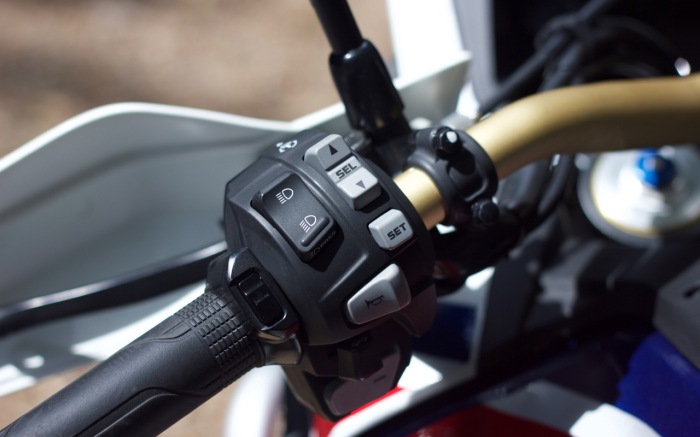 Switchgear hints at excessive electronics, but in fact merely swaps through trip meters.

Some riders surrendered and saved up for a KTM, a firm that always kept an eye on its motocross heritage even as the bikes got bigger and bigger. Others picked up Suzuki V-Strom 650‘s, Triumph Tiger 800‘s or even BMW’s mini-GS, the F800, whose smaller engines and consequently lower weights theoretically meant better off-road capability.

But even here there was either a great deal of aftermarket work to be done to compensate for obvious street-bike design compromises, or increasing complexity and price to deter anyone from hazarding a trip too far off the beaten track.

Honda have apparently been paying attention to this previously under-served portion of the market, and delivered up a dirt-biased 1000cc motorcycle that so badly undercuts the large-capacity competition that it calls into sharp relief just how silly price tags of these behemoths have become. £10,499 means that the V-Strom 1000 is the only full-size ADV bike with a lower retail price, and unlike its pricier competitors there isn’t an enormous list of electronic options to double your monthly payments. With just one exception. 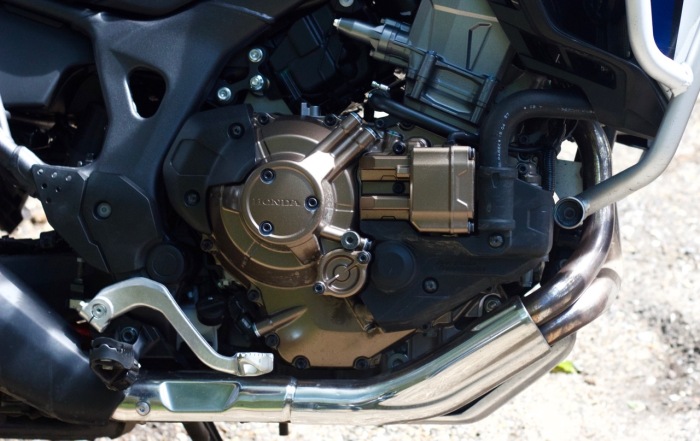 Honda’s DCT gearbox is an £800 option for the Africa Twin, and ignoring dealer-fit extras such as the ubiquitous crash bars, spotlights, hand guards and imitation Touratech luggage, it’s the only big extra you can choose to add. Selecting it increases the weight of your new large capacity dirt bike by 10kg, just as it does in all Honda’s similarly equipped motorcycles, but seeing as I’ve only ridden this heavier automatic version I can’t comment on how much of a difference the extra mass makes.

Far better riders than me have already filled the internet and the press with videos, images and text demonstrating the new Honda’s impressive (and possibly best-in-class) off-road capability, but having no dirt skills to speak of I opted not to follow in those well-worn tracks. By all accounts if you’ve been waiting for a large-capacity ADV that can genuinely wheelie up sand dunes, you’ve probably already made your mind up and bought one. You’re probably loving it to bits as well, but then you’re probably not reading this.

If you are reading these words, then maybe you’re wondering if Honda have also made a bike for those of us who don’t want or can’t afford one of the over-powered, over-priced European offerings, who were waiting to trade in their V-Strom‘s for something with better paint and build quality. Those of us who would equip their Africa Twins with Pilot Road 4‘s, carve through the Alps on Sunday and fight through traffic on Monday. Could this be Honda’s ultimate all-rounder?

This bike came fitted with a Remus slip-on exhaust. Trust me, you want this. It sounds amazing.

Even now, after hours of contemplation, putting my finger on why, exactly, I didn’t fall in love with the Africa Twin is no easy task. Unlike many bikes that fully disappoint me, there’s no major flaw with the execution, no obvious chink in Honda’s armour. The engine sounds great, has enough power to set the traction control off on warm, dry tarmac, and pours out an uninterrupted stream of linear torque that effortlessly propels you well into silly speeds.

Like many modern Hondas, this parallel twin hides a perfectly-balanced 270-degree crank.

The suspension is plush and compliant over bumps, yet firm and planted when cranked over at high velocities. The riding position is spacious, with plenty of legroom, and wide bars make levering the tall bike into the sharpest bends easy. Every single piece of the bike is high quality, from the gorgeous gold anodized rims to the rich paint and solid-feeling switchgear. The dashboard is a work of art, delivering every possible piece of information in an intelligent and easy-to-read layout.

As much as I love analogue dials, I don’t think there’s a prettier dash in motorcycling.

What’s more, Honda have refrained from following the herd and stuck determinedly with mechanically-adjustable forks and shock, shunned the fad of selectable throttle maps, and chosen not to nickle-and-dime their customers by trying to sell every part of the bike as an optional extra that nearly doubles the asking price. Some of Honda’s competitors will sell you a £15k motorcycle that arrives with blanking plates on the dash, as though to remind you every single day of how you cheaped out at the checkout.

Some people are perfectly happy to adjust their suspension without the aid of computers.

It’s difficult to see where exactly it all goes wrong for me, but I suppose it starts when you grab the brakes. There’s a lot of fork dive, a side effect of the need for soft, long-travel suspension to deal with all those sand dunes you’ll be jumping over. And if you push it hard on twisty roads you become increasingly aware of that large 21″ wheel scything from side to side, combining with the long forks and ultra-wide bars to put you a long, long way from the contact patch, and inevitably, the all-important feedback.

The stock windshields on many bikes are pretty bad, but this one is truly awful. At anything above 50mph you don’t so much get buffeting as a horrible throbbing, caused most likely by the very tall, very thin piece of perspex projected above the short cockpit. Short of touching your chin to the tank there’s just no escaping it. And even the plusher, more padded of the available seats seem overly firm, apparently designed to make standing up on the pegs the more comfortable position. 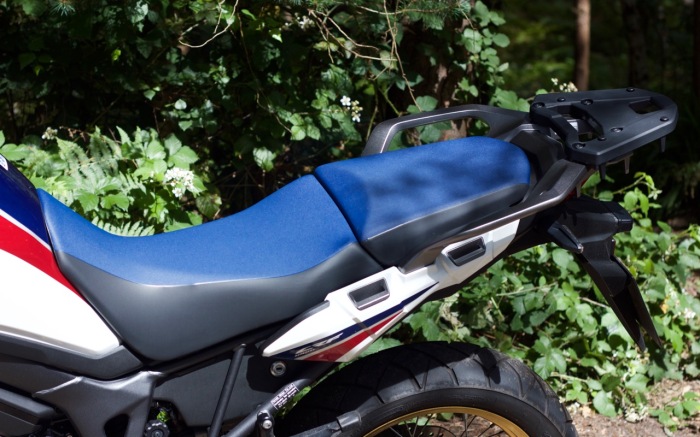 And that, perhaps, is the hint that we need to understand my general unhappiness with this bike. Everything about it that makes it a better dirt bike: the large, spoked wheels, the tall, soft suspension and the firm, narrow seat all compromise the Africa Twin’s ability on the road, which is where I would ride it 99% of the time. The worst it would ever have to manage in the south of England is a slightly muddy lane, and quite frankly a Fireblade could handle that just fine.

I can easily imagine how this is the perfect motorcycle for many Americans, living in a country plagued by low speed limits and blessed by massive unpaved expanses to legally explore. You’ve got the power, the capability, and the relative simplicity to take off into the back country and get yourself lost for weeks on end.

I can’t decide if I like the DCT in this application. I’d recommend trying with and without.

But here in the UK, where every year fewer and fewer byways remain open to powered vehicles, riding in the woods, moors or mountainsides could see you arrested and your bike crushed. I worry that the Africa Twin, with it’s off-road capabilities left unused is just too compromised. Perhaps Honda will do another version, with 17″/19″ wheels, shorter suspension and a wider, more supportive seat. But then I guess it wouldn’t be an Africa Twin anymore.

For my part I’d pick up a Suzuki V-Strom 1000 instead; Suzuki make no claims that it’s designed to go off-road, and for my requirements it’s all the better for it.

Beautifully made, flawlessly executed, but a compromised road bike.