Regular readers will know that I’m a relatively recent convert to the fancy-suspension club, having been thoroughly impressed by the RaceTech GoldValve cartridge emulators and springs on my Bandit’s forks, and then astonished by the difference the Nitron Sport Shock made to the rear-end’s traction and stability. I’d taken the gamble and confirmed that, annoyingly, it wasn’t all just marketing.

It was the culmination of many years of riding different bikes and experimenting with what little adjustment was available, always trying to improve my technique and checking that the bike was helping, rather than hindering.

Turns out there’s an awful lot that no-one was actually willing to tell me.

Allow me to explain. Imagine if you’d never had anything other than cheap supermarket beef, and then someone treated you to a cordon-bleu, magma-grilled prime sirloin steak. From that day onward, every time you chewed your way through a gristly grey lump of overcooked meat, you’d remember that melt-in-your-mouth texture and juicy taste and wouldn’t be able to enjoy anything else.

But if you’d never had the good stuff, but heard people saying how delicious beef was, you’d eventually come to the conclusion that you were the only sane person in a mad world, or that there was something wrong with your taste buds.

For me, bikes with basic damper-rod forks and machine-pressed shocks with one-size-doesn’t-fit-anybody spring rates are now all impossible for me to properly enjoy. I’ve ridden bikes that hug the road, absorbing the worst knocks while communicating the texture of the road surface and level of grip as though I was running my fingertips across the tarmac. In comparison, Rosa’s PCX feels like it’s got pogo sticks on both ends – ones that inexplicably turn to granite whenever I hit a speed bump or pot hole, throwing me out of the seat.

And it isn’t just a case of “it’s just a scooter”. The Triumph Street Triple that I rode on my test ride was almost as bad. I didn’t worry too much at the time, because I would be buying the ‘R’ model, equipped with high-quality, fully-adjustable forks and shock. But for a bike that, even in standard trim, is supposed to be the benchmark for handling, it certainly struggled to keep the rubber in contact with the road.

These days, I can figure out pretty quickly how good the suspension on a given bike is and ride accordingly; I don’t try to do a flying lap of Silverstone on a stock Harley-Davidson Sportster and expect it to grip like a CBR600. This is not a problem that affects anyone who has been riding for years and can compensate for poor handling, or can afford and has the knowledge to upgrade and improve.

It’s not a problem, in the main, that affects sports-bike riders, whose bikes have always come equipped with high-quality suspension out of the crate, nor those wealthy enough to afford any of the high-end adventure bikes with their electronic suspension.

It’s a problem that affects new riders – the ones the whole industry are desperately trying to get on-board and spreading the word about how awesome their new hobby/sport/transport is.

New riders who, having just ridden something that tried to throw them off over every ripple in the road while feeling like it was about to lowside around every bend, might just give up and get back in their car. I know how they feel. It’s difficult to convince yourself that you too can get your knee down around that corner like you’ve seen other riders do when your bike is either so floaty that it feels like it’s about to slide away, or the handlebars are doing their best to wrench themselves free from your grip.

It’s true that manufacturers can’t really do much here. Some of my favourite bikes on the market at the moment (ER-6, CB500R, MT-07) all come with basic suspension in an effort to get costs down. And as I’ve written before, I’m all in favour of bringing motorcycling back down to levels where mere mortals could contemplate buying one new and enjoying the security of a warranty – very important when you’re still new to the idea of oiling a chain.

If Yamaha had equipped the MT-07 with Öhlins forks and shocks I doubt it’d be hitting the £5200 RRP (that price is insane!). I would love there to be an optional ‘R’ version with better brakes and suspension for those of us that were going to replace all those parts anyway, but I’m not going going to expect miracles from the stock bike at that price point.

No, this time I’m pointing the finger at people further down the chain, who really ought to know better – at journalists, and to a lesser extent, the staff in the dealerships.

You would think that having ridden the most beautifully setup bikes in the world would make bike magazines and websites ultra-critical of cheap suspension on the latest 250cc street bike. After all, they’ve ridden everything – they should be able to compare. But as I’ve noticed from my own experience, if you’re a more accomplished rider you can compensate for the shortcomings of almost any bike – hence my brother’s ability to leave me for dead on Rosa’s old GPZ500 – a bike I was convinced had tyres made of solid concrete. But I watched him drop it into a corner in a way that would impress Valentino Rossi.

I remember riding Rosa’s 600 Bandit and thinking it was fine, until I analysed my own riding in an attempt to pinpoint why she was having trouble and realised that I was compensating for the erratic throttle response, dodgy brakes and creaky suspension. To her, it must have felt like the bike was just broken. At first she (incorrectly) thought she wasn’t a very good rider!

Ironically, the less experienced you are, the more important quality suspension is. You need the bike to look after you while you’re learning to push the limits. You need to know that the tyres will stick to the road, that the brakes will stop you quickly, that any limits you experience are your own so that you can focus on improving your technique.

If the limits are so low, or worse – seem to change as you ride, you’re going to think it’s you who’s doing something wrong. You won’t be able to learn from the feedback you’re getting from the bike, because there will be too much white noise mixed in. It contaminates the experiment, so to speak.

Go read a review in your favourite bike magazine of the latest top-end exotic sportsbike. They’ll rave about the grip, the handling, about how confidence-inspiring it is. Now go read a review of, say, the CB500F from the same publication. They’ll use words like “fine” and “adequate” and “perfectly good” to describe the suspension and brakes, but that’s because they seem to imagine that the sort of person who buys these bikes is aware that the suspension is cheap and basic, and will ride accordingly.

I had no idea that the suspension on my Fazer or VFR was worn out or just terrible. I know this now, having ridden properly set-up bikes. But no journalist will tell you, and neither will a dealer. I’m not expecting Suzuki’s staff to tell me “this bike is great, but the suspension’s rubbish, best replace it ASAP.” That would be silly – no manufacturer wants they’re people on record criticising their product. 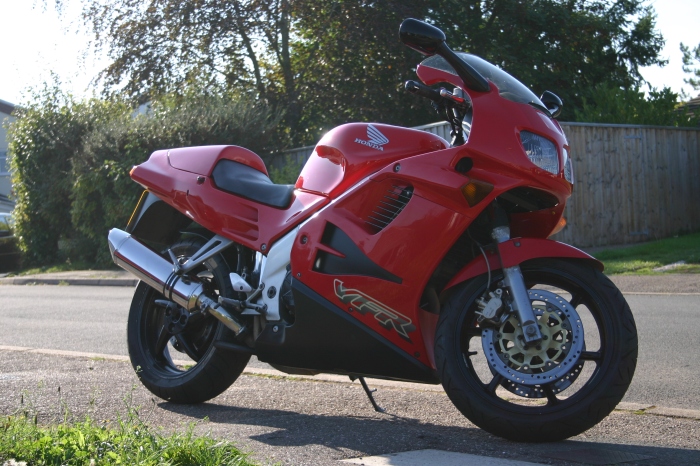 Looking good for 50k miles, but could have done with a new shock and forks

But I would expect something like “rides fine around town and on the motorway, but the forks dive like hell under hard braking, and the front end can get jittery during fast sweeping bends. Also, watch that back end over rough surfaces under full power”. Same goes for journalists. Don’t just say “it’s fine”, tell us what to expect when we’ve ridden for a little while and we start to push ourselves and the bike harder. Warn us that while it’s fine for smooth, steady riding, it’s no sportsbike.

New riders aren’t idiots, but they also haven’t got twenty years of experience biking, and probably don’t have any friends that ride who could tell us this secret information. And don’t worry about patronising your older readers. New, young riders are the future of motorcycling; your regulars don’t need any convincing. They already know it’s awesome.

Just don’t leave us thinking we’re rubbish motorcyclists, that there must be something wrong with us. No review I ever read of the Fazer said anything about the front end getting light and twitchy above 120mph. Finding that out on the Isle Of Man was certainly an exciting surprise for a relatively inexperienced new biker. Some warning would’ve been nice. And yes, it seems obvious to me now that the FZ6 had cheap suspension and would of course behave like that, but I had to figure it out the hard way.

Some people don’t. They just crash, or maybe they just sell the bike and never ride again.

Is that really what we want?

One thought on “Suspension: It’s Not You; It’s The Bike”